On the boundary between the Earth’s lower mantle and the core are accumulations of small rock bodies called ultra-low velocity zones.  Although they were thought to be composed of melted mantle rock, a new study published in the current issue of Nature Communications and co-authored by EES’ Dr. Allen McNamara shows they could be composed of something different.

Ultra-low velocity zones sit about 1800 miles below the surface. The name is based on the fact that seismic waves slow down significantly when traveling through them. According to Mingming Li, Assistant Professor from Arizona State University and lead author of the paper, “Their global distribution and large variation of density, shape and size suggest that they have different composition.” 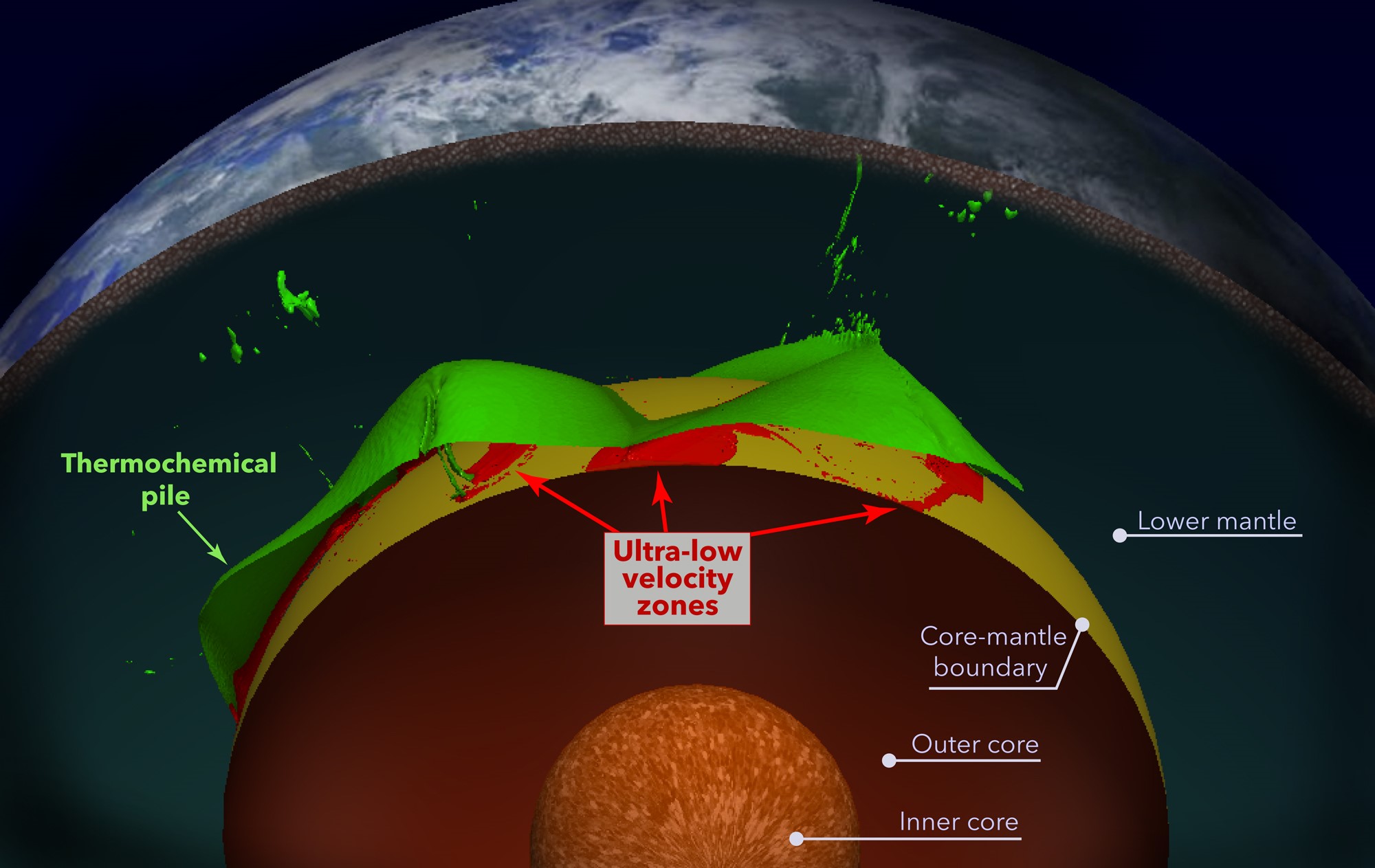 The Earth’s lower mantle has layers of varying material. Last year, McNamara and Ed Garnero, another co-author and professor at Arizona State University, reported that large areas called Thermochemical piles or “blobs” exist deep within the lower mantle. The origin and composition of these blobs are unknown, but they are believed have clues about the how the earth was formed and how it works.

The mantle, although it’s made of rock, acts more like fudge simmering on a stove. The heat source for this motion comes from the core which lies just below. Mantle rock responds to this heat with a slow churning-convective motion.

This study looks at the relationship between the small rock bodies and the location of the much larger blobs. McNamara, an international expert in numerical modeling of deep earth processes, said the study was based on two models, one of molten rock and the other of dense composition rock. “We look at the results of both and see where each would occur.”

“What we ultimately found,” continues McNamara, “is that if ultra-low velocity zones are caused by melting of otherwise normal mantle, they should be located well inside of the thermochemical piles, where mantle temperatures are the hottest. If they are instead caused by some other composition, then although they could originate outside of the piles, they would continually be carried toward the edges of piles by mantle convection, where they collect. This is consistent with what we see in the seismic observations.”

This research is an extension of work that Li started under McNamara’s direction as a grad student at Arizona State University. McNamara said “It makes me very proud to see my former student developing these ideas further.” Additional co-authors on the paper include Edward Garnero and Shule Yu of Arizona State

Looking at the bigger picture, McNamara summarized the value of the study this way, “We’ve discovered new ideas about how to put observations together…And so that helps motivate future studies for seismologist to look for things when they have that understanding.”