The Department lost a great colleague over the Thanksgiving holiday. Professor Emeritus Aureal T. Cross  was a remarkable individual who touched many lives through his incredible career. His paleobotanical colleague, Professor Emeritus Tom Phillips, from the University of Illinois, wrote the attached bio sketch  for a special issue of Coal Geology in 2007.  A memorial service is planned for a future date, likely in the Spring. 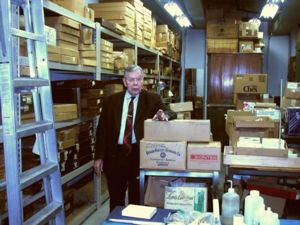 Prof. Aureal Cross with a portion of his research collection

An Ohioan by birth, June 4, 1916, in Findlay, Hancock County, Aureal T. Cross grew up an Iowan on a dairy farm near Waterloo at Castle Hill. He was the second of five children of Congregational Minister Raymond W. and Mrs. Myra Jane Coon Cross. Aureal’s grade school education was mostly in a one-room school at Castle Hill, then to East Waterloo, junior high and high school, where music was as important as farm work before and after classes. On a history and music scholarship at Coe College in Cedar Rapids, Aureal was drawn to L. R. Wilson’s physical geology course and the summer reconnaissance trips. Graduating from Coe College in 1939 with an honors thesis on pollen analysis, Aureal completed his Masters in 1941 and a PhD thesis in 1943 at the University of Cincinnati with J. H. Hoskins on Pennsylvanian age plants from coal-balls. During 1942–1946 he taught premedical U.S. Navy students at the University of Notre Dame with a 1943–1944 leave as a National Research Council Fellow. Aureal and Christina Aleen Teyssier met during 1943 in Pittsburgh and married in 1945. Aureal replaced K. E. Caster, his paleontology mentor, for three and one half years (1946–1949) in the Geology Department at Cincinnati, and did field mapping for the Ohio Geological Survey during the summers. Cross established (1949–1957) productive graduate training and research programs in the West Virginia University Geology Department and the West Virginia Geologic and Economic Survey where he had dual appointments. His move (1957–1961) to Exploration Geology, at Amoco’s Pan American Petroleum Corporation Research Center in Tulsa, Oklahoma, permitted him to develop and supervise a major palynological research group. The return to academia (1961) at Michigan State University in East Lansing resulted in one of the most comprehensive graduate training programs in paleobotany, palynology, biostratigraphy and paleoecology in North America. Although Aureal Cross officially retired in 1986, he has continued research projects, publication of manuscripts, attends professional meetings with Aleen, and has kept in touch with several generations of his students as well as with many colleagues. He has received numerous awards, none more deserved than those recognizing his outstanding contributions as a teacher, coal geologist, and paleobotanist.