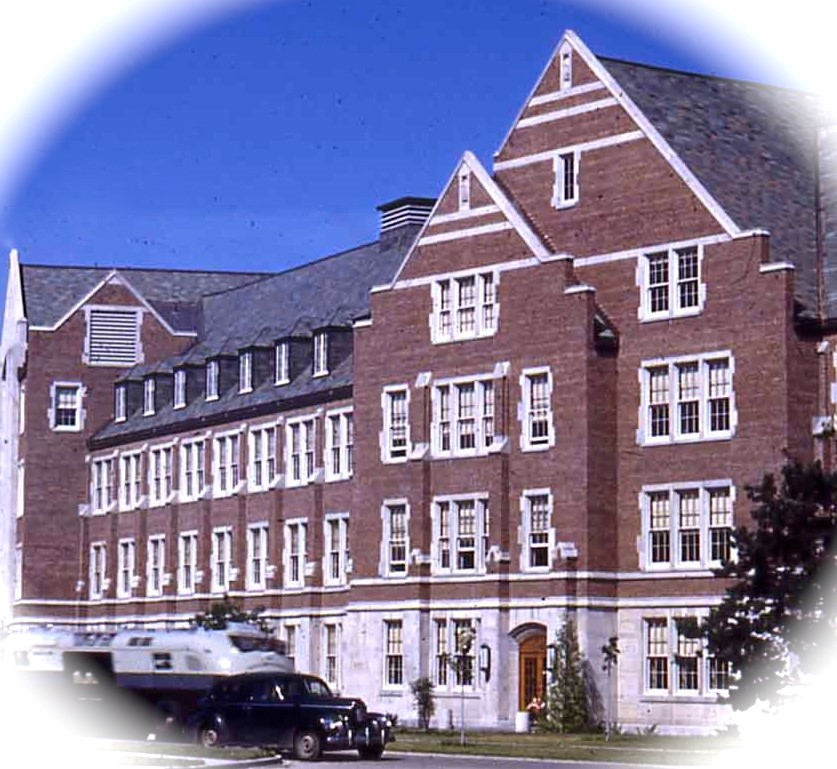 Natural Science Building, circa 1951 (Photograph by John Snyder, class 1951). The “collegiate gothic” building was designed by O.T. Munson, an architect of other several similarly styled buildings on campus.  Construction of the 257,690 sq ft. building started in 1946 at a cost of $3.6 million dollars. Three years later, 1949, departments started moving in.  Formal dedication took place in 1950.

In the 1840s a movement developed in Michigan for the establishment of a school of higher education that would teach scientific agriculture to the sons of the state's farmers. In 1850, the state constitutional convention adopted Article 13, Section 11, calling for the creation of an Agricultural School. On February 12, 1855 Governor Kinsley S. Bingham signed into law the new statute that founded the Agricultural College of the State of Michigan.  The College was placed under the jurisdiction of the Board of Education of the State of Michigan; in 1857 the College admitted its first class.

Geology and mineralogy were specifically mentioned as areas of instruction in the Laws of Michigan forming the State Agricultural College (No. 129, Section 5).  These subjects have been offered at MSU since 1857, were mentioned as a senior course in an outline of the four-year course of study.  The 1861 Catalogue of the State Agricultural College offers the following descriptions of the geosciences on page 21: “The studies in Mineralogy occupy about two months; and the course is sufficient to give the student knowledge of the general principals of the science, and to enable him to recognize the more frequently occurring minerals and those which have an economic value. A course of daily recitations in Geology, during the first half of the junior year, is fully illustrated by maps, diagrams, specimens, &c., and accompanied by familiar lectures on the relations of the science to Agriculture.”

From 1900-1906, Geology 1 and 2 were offered as electives. The courses included both structural and historical geology, as well as an introduction to mineralogy and lithology. By 1905-06, Geology became a "Department of Instruction" within Michigan State Agricultural College. The department began in 1925 as the Zoology and Geology Department; and reorganized in 1928 as the Geology and Geography Department headed by Stanard Bergquist.  Geography and geology separated into individual departments in 1955 and Bergquist became the first chair of geology.

Bergquist came to MAC as an instructor in 1915-16, became Assistant Professor in 1923-24, and Associate Professor in 1929-30. Bergquist was largely responsible for the early development of both the geography and geology departments.  Bergquist studied glacial geology under Leverett at the University of Michigan, worked closely with the State Geological Survey, and steered the department through the Depression and World War II. Under his leadership the geology and geography courses became full-fledged programs of study offering graduate degrees. He was able to obtain money for new faculty to develop the curriculum in both geography and geology, and helped plan the new Natural Science Building during the nearly 40 years he served at MAC/MSU.

Evolution of the Departmental name:

Thanks to Alumnus and Visiting Professor Warren W. Wood for putting together this summary.